From The Duffel Blog; bowdlerization by bluebird of bitterness.

FORT SILL, Okla. — An Army platoon leader was shocked to learn that his entire platoon had converted to Christianity en masse this week, despite his condescending and lengthy talks about his own lack of belief in God.

“I just can’t understand it,” said 1st Lt. Edward Garrison from his office, still dazed at hearing the news. “I mean, you figure there will be one or two kids who are always the, you know, the smallminded, the kids who are too afraid to be moral on their own. But my whole platoon? And after I spent so much time encouraging them to be free thinkers and humanists?

“This is just too much,” he added, before departing early for the day, telling his commander he felt ill.

Garrison’s soldiers claim that rather than dissuade them, his militant atheism actually drove them toward religion.

“I grew up Catholic,” said Sgt. 1st Class Eric Hernandez, the platoon sergeant, who noted that he fell away from religion later in life. “But with the lieutenant always throwing it in my face, saying I worshipped a dead guy nailed to a tree, making remarks about all priests being pedophiles, that s**t just got to me.” 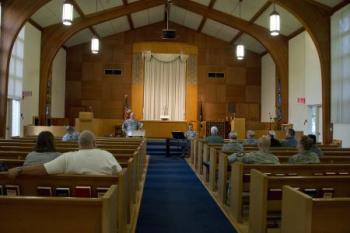 Noting that his cousin was studying to enter the priesthood, Hernandez told reporters he got so upset that he finally prayed about it. “That’s when the Lord spoke to me and said, ‘f**k the lieutenant.’ So I started going back to Mass, and now I’m as devout as my parents ever were. Because screw that guy.”

Other soldiers in the platoon concur with Hernandez’ general sentiment, noting that Garrison, upon discovering a soldier practiced an active faith, would make snide comments about having an imaginary friend or reference the Flying Spaghetti Monster.

“He even made us watch this stupid-a** Richard Dawkins documentary in the dayroom during lunch,” said Sgt. Tom Hemry. “The lieutenant thinks that Dawkins is like the patron saint of atheists. That guy is more like the patron saint of condescending a**holes. It’s like those anti-smoking ads, and how they’re so obnoxious they make you want to smoke.”

Hemry then related how he convinced the other soldiers in his squad to start going to the local Southern Baptist church.

“At first it was just to piss off that idiot lieutenant, like, really throw it in his face,” Hemry said. “But after sitting in there for a couple of weeks, we realized that these people aren’t morons, they’re actually pretty nice. And have you seen how hot Southern Baptist girls are? So we stuck around, and after awhile it wore off on us.”

At press time, Garrison had retreated to the serenity of the Fort Sill Freethinkers Society weekly meeting for comfort and reassurance.

This entry was posted on Wednesday, April 30th, 2014 at 1:16 pm and is filed under circus of life. You can follow any responses to this entry through the RSS 2.0 feed. Both comments and pings are currently closed.