From The Duffel Blog.

CAMP LEJEUNE, N.C. — Soon after President Donald Trump signed an executive order to authorize construction of the Keystone Pipeline, a large portion of the nation’s military service members applauded the move as a helpful step towards more accessible domestic beer.

That is until Marine Pvt. Jeff Ertley visited the existing length of pipeline while on leave and was disappointed to discover the 1,179-mile pipeline is actually not full of Keystone Light.

“I got to the pipeline with my beer mug and a bag of pretzels, but there wasn’t a tap to be found,” an incredulous Ertley told reporters. “What good is a beer pipeline if I can’t get the beer? I’m beginning to think this whole pipeline authorization thing is just about politics.” 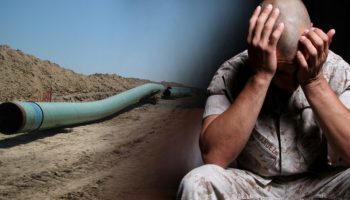 Making matters worse, the White House confirmed there was no Keystone in the pipeline in a tweet, causing panic throughout the Marine Corps.

“What do you mean, there’s no Keystone in the Keystone Pipeline?” asked Sgt. Michael Stein. “Like, it’s full of Steel Reserve instead? Natty Ice?”

The Marine Corps issued an All-Marine message on Wednesday explaining that the Keystone Pipeline was filled exclusively with oil, and had absolutely no forms of alcohol inside it.

“So we may not be getting the beer we expected, but there’s still hope out there,” Stein said. “Did you know Denmark has a city completely dedicated to Copenhagen?”

This entry was posted on Thursday, January 26th, 2017 at 9:15 am and is filed under circus of life. You can follow any responses to this entry through the RSS 2.0 feed. Both comments and pings are currently closed.

10 Responses to Marine disappointed Keystone Pipeline not full of beer