Demonstrating just how bad modern life has gotten, surveys now show that the average American today complains more in a week than people living during the black plague complained throughout their entire 30-year life span.

“There’s just so much more going wrong now,” said Karen Maxwell, a college student. “Things were just much simpler during the Black Death. All they had to deal with was squalor, starvation, and the constant threat of disease. Nowadays we have microaggressions, student debt, gluten, unequal pay for women, GMOs, problematic things like Scarlett Johansson playing a transgender man. The list just goes on and on. So it’s no wonder we complain more.” 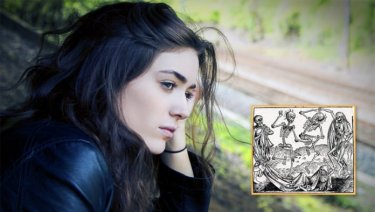 “It just makes sense,” she added before going back to using her smartphone, a device that would have seemed like dark magic to people living just a hundred years ago.

Studies back up Maxwell, as there are recorded only a handful of common complaints from the 14th century such as large boils, lack of food, and everyone dying. In the present day, though, there are thousands of things people complain about daily — poor cell service, traffic jams, unripe avocados, obesity, favorite TV shows being canceled — problems no one six hundred years ago had to deal with at all.

“It’s just a miserable time to live in,” Troy Walker said while eating a burrito in an air conditioned food court, something that would probably confuse and scare a 14th century European. “All the disease back in the 1300s sounds bad, but at least they didn’t have high health care costs from it since they didn’t have health care. And look how we’re being exploited by capitalism.” Walker pointed to his iPhone. “But in plague-ridden Europe, most people had pretty much nothing, so they didn’t have to worry about that.”

More stories of questionable veracity from The Babylon Bee:

This entry was posted on Sunday, August 5th, 2018 at 2:18 pm and is filed under Babylon Bee. You can follow any responses to this entry through the RSS 2.0 feed. Both comments and pings are currently closed.