NORTH POLE—Citing his inability to keep up with Amazon’s lightning-fast shipping times and low prices, Santa Claus filed for Chapter 11 bankruptcy today and will cease all shipping operations for the 2018 Christmas season.

Kids around the world are less interested in writing a letter to Santa and hoping they get what they wanted by the time December 25 rolls around and more apt to just hop onto their parents’ Amazon account and get exactly what they want with free Prime shipping.

“I take, like, a whole year to ship a few presents, but Amazon can get you stuff the same day—for free!” Claus lamented as he looked over a mounting stack of bills from reindeer handlers, sleigh repair shops, and toy suppliers. “I just can’t compete with that.” 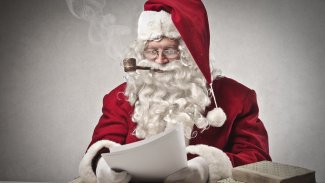 “Amazon is putting more and more mom-and-pop mythical jolly gift-giving operations like mine out of business, and it’s just really sad,” he added.

He claims gift requests are down 425% this year, a massive deficit his operation just can’t overcome. Claus attempted to reignite children’s enthusiasm and build supplemental income by launching a Twitch channel last year, but he kept losing Fortnite matches due to the massive amounts of lag on his internet connection at the North Pole. The channel folded within three months as Claus bled subscribers daily.

Upon the declaration of bankruptcy, Amazon quickly put a bid in on Claus’ assets and will likely emerge as the sole owner of all North Pole operations after reorganization.

More stories of questionable veracity from The Babylon Bee:

In Upcoming Reboot, Rudolph the Red-Nosed Reindeer to Sue Santa Claus for Discrimination

Santa Claus Converts to Calvinism, Moves Everybody to Naughty List

This entry was posted on Monday, December 3rd, 2018 at 10:00 am and is filed under Babylon Bee. You can follow any responses to this entry through the RSS 2.0 feed. Both comments and pings are currently closed.