No gnus is good gnus

A zoo was getting a new wildebeest, but the animal arrived a few days earlier than expected, before its cage was ready. The crew that was supposed to lay the floor tiles was due to arrive the following day, but for the moment, all the tiles were stacked in a corner of the cage.

There was no place else to put the wildebeest, so into the cage it went. The zookeeper gave it some food and fresh water, locked the cage, and left for the night.

When he returned the next morning to see how the wildebeest was doing, the zookeeper was astonished to see that all the floor tiles had been neatly laid. The cage was still locked, and the zookeeper had the only key. He called the veterinarian and told him what had happened. The veterinarian came and examined the animal, and finding it to be perfectly healthy, concluded that it was just a typical gnu, and tiler, too. 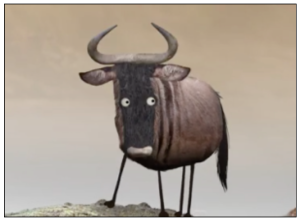 This entry was posted on Thursday, November 5th, 2020 at 12:12 pm and is filed under animal crackers. You can follow any responses to this entry through the RSS 2.0 feed. You can leave a response, or trackback from your own site.

12 Responses to No gnus is good gnus