An oldie (no pun intended) but goodie from The Onion, in honor of Senior Citizens Day.

SAN JOSE, CA—Unable to completely dismiss his doubt over his partner’s motives, a male North American black-billed magpie admitted Monday his concerns that his mate was only interested in him for the vast collection of shiny objects lining his nest.

“I invited her over to the tree to chill, but she spent more time fondling my disco ball keychain than talking to me,” said the bird, who reluctantly answered his beloved’s increasingly detailed questions about how he amassed so many foil gum wrappers.

“I’m more than just a single misplaced pendant earring—I have a lot to offer someone. I really want to be with her, but do I have to keep collecting more and more shiny things to keep her satisfied?”

At press time, the magpie, who, like all corvids, is intelligent enough to perform rudimentary counting, was “fairly sure” his stash of glittery hair ties had been dwindling recently.

SEATTLE, WA—With responses ranging from “squirming in discomfort” to “completely discouraged from studying science and engineering,” a nationwide poll group of high school-age girls revealed Tuesday that the nation’s young women are being utterly creeped out by scientists twice their age constantly attempting to lure them into the study of science, technology, engineering, and math.

“They’re always hanging around our classrooms and sending us targeted messages online—they sometimes even offer us money if we’re into their sort of thing. It’s so desperate,” said 13-year-old Tessa Levin, recounting the several times she and her friends had been approached by the type of much older chemical engineers or web developers who frequent science fairs with the hopes of involving girls in non-profit mentorship programs or computer programming sleepaway camps.

“They always try to treat us like we’re special, but the truth is, they’ll go after pretty much any girl under 18 who can draw a simple parallel circuit diagram. They’re clearly trying to groom girls for their weird lifestyle from a young age. At first it was kind of funny, but the more we learn, the more it just seems gross.”

The poll also revealed that some scientists also seem to have a thing for young black and Latino boys.

NAGS HEAD, NC—Continuously doing laundry, cooking, or vacuuming in her family’s rented beach cottage this week, area mom Catherine Yardley has spent a much-needed vacation performing all her usual household chores while in closer proximity to the ocean, sources confirmed.

“Isn’t it nice to just get away for a while and relax by the water?” Yardley said as she wiped down the kitchen counter and then took out the garbage, tasks she would normally perform at a distance of 200 miles from the beach instead of 50 feet. “I just love that I can be scrubbing the bathroom, look out the window, and see the tide coming in. We should do this every year!”

At press time, Yardley was reportedly busy preparing a meal identical to what she would have made back home, except that she planned to serve it on paper plates.

WASHINGTON—Saying no one in the country is responsible or reliable enough to serve as a legal guardian, child protective services officials from all 50 states confirmed Friday that they had found all of the nation’s adults unfit to be parents and had taken custody of approximately 80 million children.

Child welfare workers told reporters they removed all persons under the age of 18 from their unsuitable living situations and placed them under state supervision after home visits revealed that none of the 68 million parents in the United States possessed the judgment or emotional maturity necessary to raise a child.

“Throughout the nation, investigations into the home environments of children failed to find a single household in which parents were serving as positive role models in any way,” said U.S. Administration for Children and Families spokesperson Lisa Young, describing how caseworkers entered homes to find kids eating food of no nutritional value and staring vacantly at the screens of tablet computers. “We soon determined American adults are utterly incapable of setting a good example when it comes to healthy habits or personal behavior.”

“The moment you meet these people, you realize they have absolutely no business being parents,” she added.

Dispatched to homes nationwide, social services representatives said they typically encountered children who were seated in front of a television for hours at a time, with their parents engaged in the very same sedentary behavior on a nearby couch and only interacting with their children to ask what they wanted from the drive-thru. [continue reading here]

ROCHESTER, MN—In an effort to help working individuals improve their fitness and well-being, experts at the Mayo Clinic issued a new set of health guidelines Thursday recommending that Americans stand up at their desk, leave their office, and never return.

“Many Americans spend a minimum of eight hours per day sitting in an office, but we observed significant physical and mental health benefits in subjects after just one instance of standing up, walking out the door, and never coming back to their place of work again,” said researcher Claudine Sparks, who explained that those who implemented the practice in their lives reported an improvement in mood and reduced stress that lasted for the remainder of the day, and which appeared to persist even into subsequent weeks. 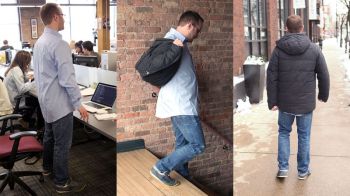 “We encourage Americans to experiment with stretching their legs by strolling across their office and leaving all their responsibilities behind forever just one time to see how much better they feel. People tend to become more productive, motivated, and happy almost immediately. We found that you can also really get the blood flowing by pairing this activity with hurling your staff ID across the parking lot.”

Sparks added that Americans could maximize positive effects by using their lunch break to walk until nothing looks familiar anymore and your old life is a distant memory.